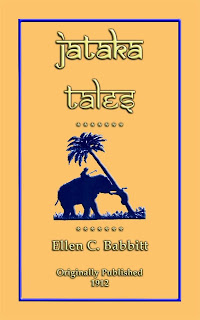 The Elephant Girly-face
The Banyan Deer The Ox Who Envied the Pig Why the Owl Is Not King of the Birds
Posted by Michael at 11:25 AM No comments: 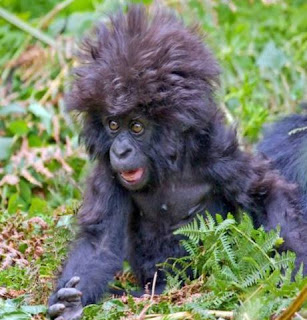 One of the Stupid Monkeys


The Stupid Monkeys
The Cunning Wolf
The Penny-Wise Monkey

The Turtle who could not stop talking
The Ox who won the forfeit The quarrel of the quails The Measure of rice
Posted by Michael at 11:03 AM No comments:

Week 13 Story, The Mischievous Mightyena and the Rattatas

Before you start reading please check out the version on my other blog which will be updated!

I am so excited for you to read my third story here for my portfolio. I cannot believe that I am going to go three for three on all my stories being Pokemon themed. For this entry I decided to retell a story from "More Jataka Tales" by Ellen C. Babbitt in 1922. More specifically of those tales I chose "The Tricky Wolf and the Rats ". I love these Jataka Tales because they are fun and exciting short stories that can be ready very easily along with some lessons to learn from. This like many others contains a story of deception where the tricky wolf tries to pull one over on the rats. I decided to initially alter the story by making a change up with the characters. Rather than a wolf I chose Mightyena who is the closest to a wolf of the Pokemon I looked at. The rats in the original text were all the same species. I changed it to where the regular rats were Rattatas (a mouse Pokemon). The King rat I also changed into a Raticate (another mouse Pokemon) I wanted the reader to be able to distinguish between the regular rats and the king more easily. Raticate is the evolved form of Rattata so it would only make sense that the Rattata's would listen to a Raticate. I hope you enjoy this story and thanks for reading! 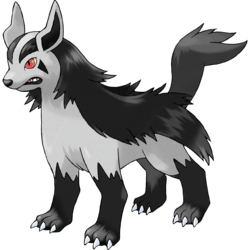 There once was a Raticate who  lived in the Viridian forest, and around a hundred Rattatas who looked to the Raticate as their king.

A Mischievous Mightyena saw this village made up of Rattatas. Mightyena then started mapping out a plan on how he could trap the Rattatas. He wanted to eat them all, but how was he going to get them trapped? Finally Migheyena devised a plan that was too perfect to fail! He went to a corner of Viridian forest near the home of the Rattatas and King Raticate. Then Mightyena waited until he saw one of the Rattatas coming. Then he stood up on his back two legs.

The Chief Raticate saw the Mightyena and asked, "Mightyena, why are you standing like that only on your hind legs?"

"Because I am got into a Pokemon battle earlier and now my back legs are hobbled," replied the Mischievous Mightyena. "It hurts me too much to try and stand or put any pressure on my front two legs." 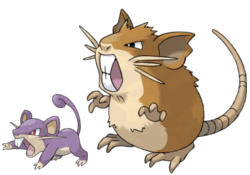 King Raticate (right) and one of the Rattatas (left)

"I am sorry to hear that, but why are you keeping your mouth open Mighyena?" asked King Raticate.

"My mouth stays open because I am trying to  breathe in as much oxygen as possible.," said the Mighyena. "The air is the only thing that gives me life. I do not eat or drink so this is the only way that I can gather energy to live off of. I can not run or walk, so I am going to just stay here for now. I am just trying to survive and wait until my legs recover where I may run through the forest like I used to." When the Rattatas and King Raticate left the Mightyena began laying down.

Chief Raticate felt so bad for the Mighyena. The King went each night and morning with all the other Rattatas to check in with the Mightyena to see how he was doing. He as if he was not in good shape, but he did not complain his current circumstance.

Every time  the Rattatas and their King left the Mightyena caught and ate the last one. Then he licked his lips clean, and continued on as if nothing ever happened.

Every night the number of Rattatas at bedtime continually shrunk. Then they asked the Chief Raticate what was going on with all the missing Rattatas. The King was not sure, but he was suspicious that Mightyena had something to do with it.

Chief Raticate the next morning said, "You all go first this time as we visit Mightyena, but this time I will leave last."

They did as their King wished. Just as King Raticate began leaving last Mightyena leaped towards him. Unfortunately for Mightyena he was not quick enough. Chief Raticate managed to escape the Mightyena's attempt at his life.

"So you lied about the air feeding you? Rattatas is what you are actually eating. Everything that you said about your lame legs was nothing, but a life. You aren't going to be tricking any one else Mightyena," explained chief Rattata. The King sprang forward towards the Mightyena and used Super Fang on his neck. A critical hit! There was not a PokeCenter in sight to the Mischievous Mightyena finally fainted.

The Rattatas and King Raticate lived happily ever after in their home near Viridian forest.

The Three Fishes
The Tricking Wolf and the Rats The Woodpecker, Turtle, and Deer The Golden Goose

Crocodile and Monkey
How the turtle saved his own life
The Merchant of Seri
The Turtle who could not stop talking
The Ox who won the forfeit
The quarrel of the quails
The Measure of rice
Posted by Michael at 12:15 AM No comments:

Our story begins in 1903 with Dr. Blake from Miskatonic University in Arkham, Essex County, Massachusetts. Dr. Blake was assigned by his University to write an article to investigate the Old Greybriar House and the mystery around the murders that had occurred. It has been 10 years since the famous 1893 murder that occurred at the Old Greybriar House.  The story goes that a trespasser was found dead in the barn, a pitchfork driven through his skull. Nobody knows exactly what occurred that night, but they believe that Hiram Greybriar’s ghost did it. Dr. Blake took interest in this story as he is a skeptic of any supernatural activity and wanted to get to the bottom of what happened that night. It is 7 pm on a windy and rainy night and the crew has just arrived at the Old Greybriar House. “I guess this is it.” Says Dr. Blake. “The legendary Old Greybirar House, let’s see what all the drama is about.” 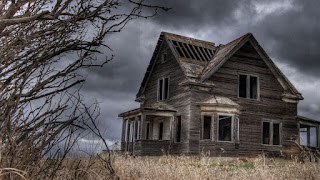 The house from the outside obviously shows its age, windows all shattered, paint color all washed away, cobwebs everywhere, overrun by weeds, and an overall eerie vibe given off. Dr. Blake pulls out his camera and begins to survey even more of the property. Blake sees a young man walking on the other side of the street from the house and decides to approach him. “Excuse me young man do you know anything about the murder that occurred here 10 years ago?” The boy with a shuttered look and a glazed look in his eyes responds with a clear short “Yes.” Dr. Blake with a concerned look asks, “Can you tell me anything you know about this house and what happened hear?” The boy slowly nods his head and then responds. “I used to live across the street from here. My older brother was dared by a couple of his classmates to try to spend the night at the Old Greybriar House. The house was thought to be abandoned after all the previous owner widow Hiram Greybriar committed suicide there after her husband had died in a car accident. 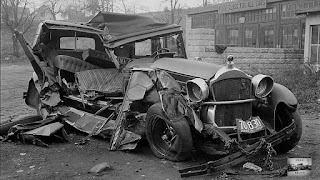 Scene of the car crash

Many other high school students had chickened out on the dare, because they thought the house was haunted. My brother wasn’t afraid though. The night was getting late, so all the other classmates went home after my brother had been in the house a while and seemed like he was fine. It was around 4 am when out of the complete silence of the night we heard a blood curdling scream. My family all rushed over to see what had happened only to find my older brothers was dead. There were no witnesses, no suspects, and no leads. The local police force had given up. They could not find any evidence of who caused my brother's death, but all the locals think it was the ghost of Hirm Greybriar who killed him.” Blake looking visibly concerned looks to the boy and says, “Thanks for the help son.” The boy replies, “Your welcome, I better get home it is getting late.” Blake goes back to looking around the house for evidence. He eyes back to the house at one of the windows and sees a shadowy figure. He sees what looks to be a shadowy figure. Blake squints to see what is behind the window. 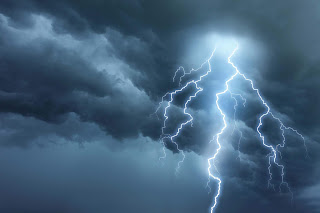 
Suddenly, a loud crack of lightning strikes near the house. Blake surprised by how the close the storm was falls to the ground in fear. Blake looks back up to the window to see woman that looks almost floating. Blake out loud screams, “That can’t be!” Blake sees that is the ghost of Hrim Greybriar not just standing there but holding a pitchfork pointed up with another impaled head. Blake’s entire body trembles as it looks like he sees his own head impaled on the pitchfork. The lightning strikes again, Blake looks away from the light, then back to the window. The ghost is gone, but the on the window in blood is written, “Leave Dr. Blake!” Blake sees this and screams while sprinting back to his car. Blake drove like his life depended on it and never returned to the Greybriar house! The house is said to be still haunted by the Greybriar ghost and will kill any trespassers.
Posted by Michael at 9:46 AM 4 comments: